4 creepy dishes in Nghe An

In Vietnam, tourists will be overwhelmed by abundant delicious dishes with a large number of nutrients. For many locals, this includes dishes prepared with a wide variety of creatures, even insects.

Today, Vinh Guru’s blog is going to show several weird cuisines existing in some areas in Nghe An.

An exotic meal is prepared from silkworm pupa after the silk is taken from its cocoon. The dish is a bit shocking at the first look, but your perception may change after you enjoy its buttery taste as it is melting in your mouth. When talking about eating larva, most of the people are still hesitant, but whoever has had the chance will want to enjoy it one more time. Not only the good taste, but also it contains quite a lot of good nutrients for human health, can promote children’s growth, and is antirachitic (prevents constipation).

Basically, it is the same as other soups, however, it is cooked with eggs and ants.

This dish is only in the Thai community in Western Nghe An. The red ant that lives only in broad canopy trees, along streams or in old forests is the important ingredient. With a sweet and sour taste, ant egg soup is also a cooling dish in the hot summer days of Thai people.

All scorpions have a venomous sting, but the vast majority of the species do not represent a serious threat to humans. In most cases, healthy adults do not need any medical treatment after being stung. With the unique taste and master skills of locals, scorpions become a local specialty of the Nghe An. 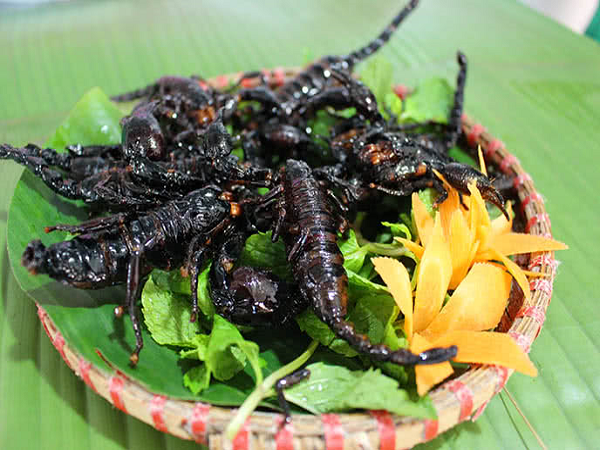 Tadpoles are a favorite dish of the ethnic minorities in Nghe An. Tadpoles can be an ingredient in a lot of dishes such as sour soup with bamboo, sausage, and others. This is a traditional cuisine prepared by Kho Mu people for their guests.

Despite the strange and creepy initial appearance, these dishes still are a part of our featured culture and make a lasting  with tourists. Let’s try and discover them with Vinh Guru.

Things to Do in PU MAT NATIONAL PARK

Getting one day off but not deciding where to spend it yet, you’re recommended to…

5 out of 5
QUANG BINH ADVENTURE TOUR

5 out of 5
FOODIE ZONE IN VINH

Dear our Beloved Customers,
Due to all the new updates of coronavirus outbreak, it is changing rapidly and unpredictably in nearly 150 countries in the world. For the sakes of our health, some restrictions on travelling around the world have been applied. As the result, Vinh Guru will have to temporarily suspend all tour activities from March 16th 2020 until the situation is under control. We will inform you immediately if we are able to reopen.
In the coming days, if you book a tour during the closure time, you will be advised to change your tour date to later in 2020 or 2021.
We sincerely apologize for any inconvenience caused by this unwanted situation, and we look forward to your kind understanding. As always, we are more than happy to support you as much as we could while you are travelling in Vietnam.